– A career criminal (Gibson) nabbed by Mexican authorities is placed in a tough prison where he learns..

A career criminal (Gibson) nabbed by Mexican authorities is placed in a tough prison where he learns to survive with the help of a 9-year-old boy. 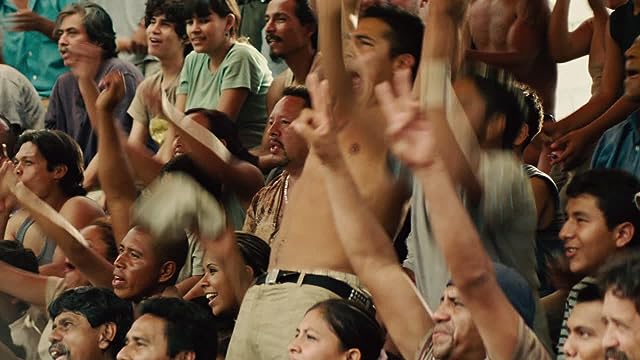 Heading toward the Mexican border, a getaway driver disguised as a clown and his wounded accomplice try to escape the American Police with a loot of over $2 million hidden in the trunk of the car. In a desperate attempt to break through the thick border fence, the driver crashes the car, the accomplice dies and he inevitably gets apprehended by Mexican Police officers Romero and Vasquez who want the money just for themselves. As the only American inmate in the infamous "El Pueblito" Mexican prison, which resembles more of a small village of convicts rather than a usual prison, the driver quickly gets the nickname "The Gringo" and finds out first hand how rough it is to be a stranger in the perilous world of Javi, the ruthless crime lord who runs the prison. Sooner or later, the Gringo will form an alliance with a 10-year-old kid whose peculiar immunity in this mad place will efficiently keep him alive, only to realise that in this pit, everyone knows about the $2 million. In the end, with an order issued for his execution and knowing that his time is short, will the Gringo manage to save himself and the kid's family, get his money and ultimately escape once and for all from the El Pueblito? 6.50
Movie
Son of a Gun
― Locked up for a minor crime, 19 year old JR quickly learns the harsh realities of prison life. Prote.. 6.30
Movie
In Hell
― A man must survive a prison where hardened criminals battle to the death for the warden's entertainm.. 7.70
Movie
Cell 211
― The story of two men on different sides of a prison riot -- the inmate leading the rebellion and the.. Movie
A Man Apart
― When Vetter's wife is killed in a botched hit organized by Diablo, he seeks revenge against those re.. 7.60
Movie
Payback: Straight Up
― With friends like these, who needs enemies? That's the question bad guy Porter is left asking after .. 6.50
Movie
Faster
― Driver (Dwayne Johnson) has spent the last 10 years in prison planning revenge for the murder of his.. Movie
Boiling Point
― Red is an aging scam-artist who's just been released from prison together with Ronnie, a young and n..
See More Related Movies