Let The Right One In

– Set in 1982 in the suburb of Blackeberg, Stockholm, twelve-year-old Oskar is a lonely outsider, bull..

Set in 1982 in the suburb of Blackeberg, Stockholm, twelve-year-old Oskar is a lonely outsider, bullied at school by his classmates; at home, Oskar dreams of revenge against a trio of bullies. He befriends his twelve-year-old, next-door neighbor Eli, who only appears at night in the snow-covered playground outside their building.

Let the Right One In: "Underpass Attack" 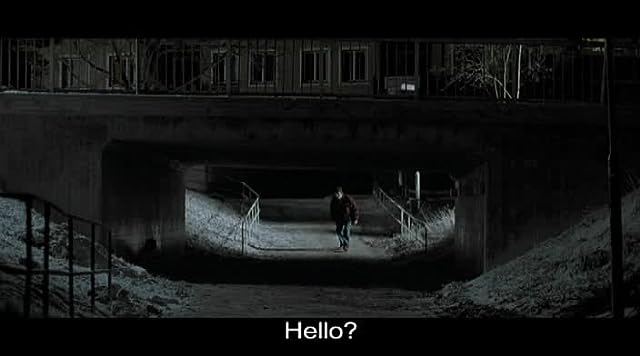 Oskar, a bullied 12-year old, dreams of revenge. He falls in love with Eli, a peculiar girl. She can't stand the sun or food and to come into a room she needs to be invited. Eli gives Oskar the strength to hit back but when he realizes that Eli needs to drink other people's blood to live he's faced with a choice. How much can love forgive? Set in the Stockholm suburb of Blackeberg in 1982. Movie
The Possessed
― Whilst growing up in rural Thailand, a young orphan girl is taught the ways of magic by her grandmot.. 7.20
Movie
Thirst
― Sang-hyun (Song Kang-ho), a respected priest, volunteers for an experimental procedure that may lead.. 7.00
Movie
A Girl Walks Home Alone at Night
― In the Iranian ghost-town Bad City, a place that reeks of death and loneliness, the townspeople are .. 7.10
Movie
Let Me In
― A bullied young boy befriends a young female vampire who lives in secrecy with her guardian. A rema.. 7.60
Movie
In a Better World
― The lives of two Danish families cross each other, and an extraordinary but risky friendship comes i.. 7.40
Movie
The Devil's Backbone
― After losing his father, 10-year-old Carlos arrives at the Santa Lucia School, which shelters orphan.. Movie
Queen of The Damned
― Lestat de Lioncourt is awakened from his slumber. Bored with his existence, he has now become this g.. 7.50
Movie
Bram Stoker's Dracula
― When Dracula leaves the captive Jonathan Harker and Transylvania for London in search of Mina Harker.. 7.30
Movie
Only Lovers Left Alive
― A depressed musician reunites with his lover in the desolate streets of Detroit. Though their romanc.. 6.70
Movie
May
― Psychological horror about a lonely young woman traumatized by a difficult childhood, and her increa.. Movie
Kiss of The Damned
― Beautiful vampire Djuna tries to resist the advances of the handsome, human screenwriter Paolo, but .. 7.00
Movie
Near Dark
― A mid-western farm boy reluctantly becomes a member of the undead when a girl he meets turns out to .. Movie
Carrie
― A reimagining of the classic horror tale about Carrie White, a shy girl outcast by her peers and she.. 6.70
Movie
The Hunger
― Miriam and John are an elegant couple with a dark secret: they are vampires. Feeding on human blood,.. Movie
The Moth Diaries
― Rebecca is suspicious of Ernessa, the new arrival at her boarding school. But is Rebecca just jealou..