Man on The Moon

– A film about the life and career of the eccentric avant-garde comedian, Andy Kaufman...

A film about the life and career of the eccentric avant-garde comedian, Andy Kaufman.

Man on the Moon 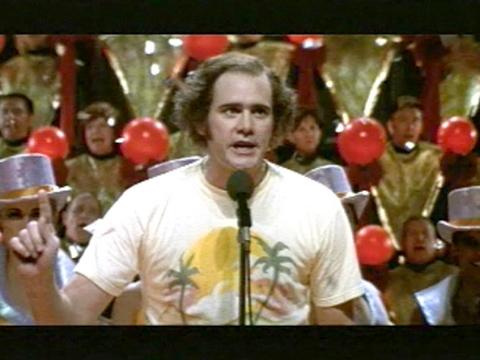 Man on the Moon is a biographical movie on the late comedian Andy Kaufman. Kaufman, along with his role on Taxi (1978), was famous for being the self-declared Intergender Wrestling Champion of the world. After beating women time and time again, Jerry Lawler (who plays himself in the movie), a professional wrestler, got tired of seeing all of this and decided to challenge Kaufman to a match. In most of the matches the two had, Lawler prevailed with the piledriver, which is a move by spiking an opponent head-first into the mat. One of the most famous moments in this feud was in the early 80s when Kaufman threw coffee on Lawler on Late Night with David Letterman (1982), got into fisticuffs with Lawler, and proceeded to sue NBC. 7.60
Movie
Chaplin
― With the use of flashback, an elderly Charlie Chaplin discusses his autobiography with his editor, w.. 6.70
Movie
Patch Adams
― Meet Patch Adams, a doctor who doesn't look, act or think like any doctor you've met before. For Pat.. 7.20
Movie
Diner
― Set in 1959, Diner shows how five young men resist their adulthood and seek refuge in their beloved .. 7.30
Movie
The People Vs. Larry Flynt
― Larry Flynt is the hedonistically obnoxious, but indomitable, publisher of Hustler magazine. The fil.. 6.60
Movie
The Big Kahuna
― Three salesmen working for a firm that makes industrial lubricants are waiting in the company's "hos.. 6.60
Movie
The TV Set
― As a writer named Mike struggles to shepherd his semi-autobiographical sitcom into development, his .. Movie
Mr. Saturday Night
― Buddy Young was the comic's comic, beloved by everyone. Now, playing to miniscule crowds in nursing .. Movie
Slaves of New York
― Meet the denizens of New York City: artists, prostitutes, saints, and seers. All are aspiring toward.. 6.60
Movie
Living Out Loud
― Dramatic comedy about two unlikely people who find each other while looking for love. Judith Nelson ..