– James Sullivan and Mike Wazowski are monsters, they earn their living scaring children and are the b..

James Sullivan and Mike Wazowski are monsters, they earn their living scaring children and are the best in the business... even though they're more afraid of the children than they are of them. When a child accidentally enters their world, James and Mike suddenly find that kids are not to be afraid of and they uncover a conspiracy that could threaten all children across the world.

All ages admitted. Nothing that would offend parents for viewing by children. 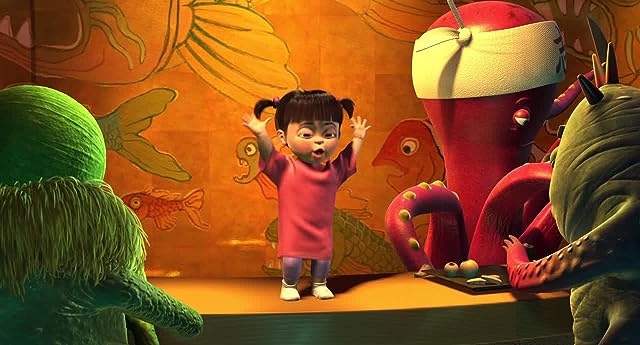 A city of monsters with no humans called Monstropolis centers around the city's power company, Monsters, Inc. The lovable, confident, tough, furry blue behemoth-like giant monster named James P. Sullivan (better known as Sulley) and his wisecracking best friend, short, green cyclops monster Mike Wazowski, discover what happens when the real world interacts with theirs in the form of a 2-year-old baby girl dubbed "Boo," who accidentally sneaks into the monster world with Sulley one night. And now it's up to Sulley and Mike to send Boo back in her door before anybody finds out, especially two evil villains such as Sulley's main rival as a scarer, chameleon-like Randall (a monster that Boo is very afraid of), who possesses the ability to change the color of his skin, and Mike and Sulley's boss Mr. Waternoose, the chairman and chief executive officer of Monsters, Inc. 8.30
Movie
Up
― Carl Fredricksen spent his entire life dreaming of exploring the globe and experiencing life to its .. Movie
The Pagemaster
― Tyler knows a lot about accidents. So much so, he is scared to do anything that might endanger him, .. 7.20
TVSeries
Toy Story That Time Forgot
― During a post-Christmas play date, the gang find themselves in uncharted territory when the coolest .. 7.20
Movie
Lilo & Stitch
― A lonely Hawaiian girl named Lilo is being raised by her older sister, Nani, after their parents die.. 6.80
Movie
Horton Hears a Who!
― One day, Horton the elephant hears a cry from help coming from a speck of dust. Even though he can't.. 6.80
Movie
Tinker Bell And The Lost Treasure
― A blue harvest moon will rise, allowing the fairies to use a precious moonstone to restore the Pixie.. 7.50
Movie
Ice Age
― With the impending ice age almost upon them, a mismatched trio of prehistoric critters – Manny the.. 8.00
Movie
Ratatouille
― A rat named Remy dreams of becoming a great French chef despite his family's wishes and the obvious .. 8.30
Movie
Toy Story 3
― Woody, Buzz, and the rest of Andy's toys haven't been played with in years. With Andy about to go to.. 7.20
Movie
Shrek 2
― Shrek, Fiona and Donkey set off to Far, Far Away to meet Fiona's mother and father. But not everyone.. 6.80
Movie
The Boxtrolls
― An orphaned boy raised by underground creatures called Boxtrolls comes up from the sewers and out of..