– A team of astronauts on the first mission to Mars crashes onto the surface, losing contact with Eart..

A team of astronauts on the first mission to Mars crashes onto the surface, losing contact with Earth. With no other recourse, and help millions of miles away, the crew is forced to make desperate choices in order to stay alive. Will they be able to survive as the minutes slip away? 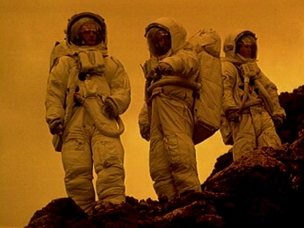 A seven-man crew of international specialists formed by Commander Andre Vishniac; engineer Luca Baglioni; doctor Jenny Johnson; astrobiologist Fidel Rodrigo; pilot Susana Sánchez; geologist Herbert Sagan; and pilot Lowell, travels to Mars to explore the planet. On arrival, Lowell stays in orbit on the mother ship while the crew lands on Mars. However, their landing craft crashes on the planet and Vishniac breaks his neck. They learn they are stranded on Mars while Lowell returns to Earth to bring a rescue team. Meanwhile, Luca calculates the oxygen, water, and supplies and concludes that there are enough for only two of them to survive the twenty-six months before an eventual rescue team reaches Mars. It's decided that Luca (engineer) and Jenny (doctor) should be the ones to stay in the spacecraft due to their specialties, while Susan, Rodrigo, and Sagan set out to explore the planet before their inevitable death. But while there is life, there is hope. 6.40
Movie
Journey to The Far Side of The Sun
― A planet is discovered in the same orbit as Earth's but is located on the exact opposite side of the.. Movie
Planet of Dinosaurs
― A space-ship gets lost and is forced to make an emergency landing on an unknown planet. The planet l.. Movie
Marooned
― After spending several months in an orbiting lab, three astronauts prepare to return to earth only t.. 8.00
Movie
The Martian
― During a manned mission to Mars, Astronaut Mark Watney is presumed dead after a fierce storm and lef.. Movie
Contagion
― In the 21st Century, terrorists have developed a new way to strike: disease. Not only have they crea.. 7.00
Movie
Without Warning
― A television program is interupted by a news network announcing that three meteors have hit the Unit.. 6.60
Movie
Robinson Crusoe on Mars
― Stranded on Mars with only a monkey as a companion, an astronaut must figure out how to find oxygen,.. Movie
Queen of Blood
― A spaceship is sent to Mars after a alien distress signal is picked up. They find one survivor, but .. 7.10
TVSeries
On The Beach
― The world has finally managed to blow itself up and only Australia has been spared from nuclear dest.. 7.20
Movie
Babylon 5: A Call to Arms
― Allies of the Shadows seek revenge against humanity. This movie sets up the series, "Crusade," the s..
See More Related Movies